The Opposite Field: Excerpt 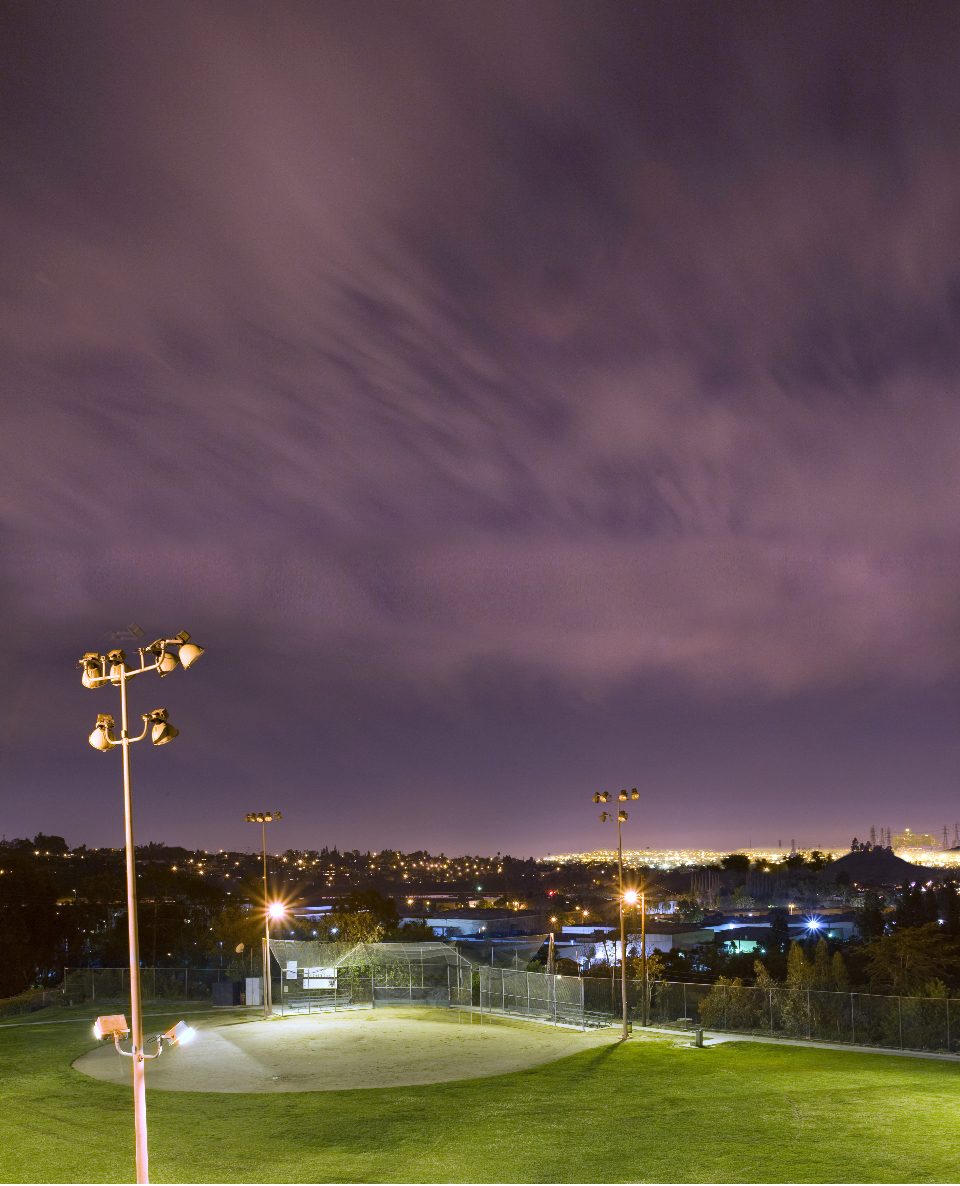 My park is called La Loma. I have always liked the sound of that, the symmetry of those double-barrel Ls, the femininity of the final Spanish vowels, the spacey La-La Land echo, all an improvement on its stiff translation: the Hill. La Loma is prettier, softer and rounder, earthier—loamier. A park for losing yourself in. The park I went looking for myself in.

Max and I have spent nine springs and summers there, through squalls and droughts, heat waves and cold snaps, from his preschool years to the onslaught of adolescence. We have celebrated there and we have sulked there, twirling like fools across the dirt and chalk, drowning our broken hearts with fusillades of water balloons. We have made friends for life at La Loma and, I suspect, enemies for just as long. We have gone there to forget and to remember, to stop time and to grow up. The park is under our skin: season after season of bites, burns, stings, cuts, sprains, scars. Max has bled at La Loma. He has barfed there. He has wet himself. I have rinsed his wounds at La Loma, iced him, kneaded him, bandaged him, scooped him off the ground, his face streaked with sweat and clay and eye-black grease, and held him in my arms. Max has stood there, in jersey and cap, and hacked out "The Star-Spangled Banner" in front of a thousand people on his electric guitar. I have given myself to those same people, cheered and groaned alongside them, accepted their prayers and shared their beers, slipped to me in Styrofoam coffee cups. Whenever we have needed it, whenever I have felt burdened or alone, La Loma has been there. The park is always the park. Our refuge. My excuse.

It rises from the haze and glare of inland Los Angeles, far from Hollywood, beyond the margins of the tourist maps. In a city that skews west, toward the surf, La Loma is on the wrong side, east of the skyline, east of skid row, east of the rail yards, the slaughterhouses, the riverbed. By a shade, it is east of East Los Angeles, the original gangland, the cultural heartland of Mexican America. La Loma marks the spot roughly at which the barrio ends and the burbs begin, where inner-city Los Angeles meets bedroom-community Los Angeles. Knots of prickly pear give way to tidy rows of jacaranda, with flurries that dust the sidewalk purple, and Depression-era adobes fade into 1950s subdivisions, of a style known as California ranch, with gas fireplaces and attached garages and faux clapboard shutters.

La Loma falls within Monterey Park, one of those invisible municipalities you could spend a lifetime in L.A. and never visit, maybe even never hear of. The town is blandly provincial and yet stunningly foreign: forty thousand of its sixty-three thousand residents are of Asian descent, the highest concentration in any city in the continental United States. It was this fact that first drew me here, as a novice journalist, almost twenty-five years ago. I was new to L.A., new to adulthood, and the battles then raging between Chinese émigrés and Anglo nativists—over language, over customs, over the right to belong—were redefining what it means to be middle class and American. From the polite liberalism of Oregon, via a fancy college in Vermont, I had been transported to a furious social laboratory on the haunches of Los Angeles. A new form of white flight was under way, not from a decaying urban core but from an ethnically convulsing suburb: Rather than embrace the new Monterey Park, twenty thousand white folks up and split. At the time, I could never have foreseen that this curious place would one day lure me back, not as a writer but as a father, that I would be returning, against the tide, to make Monterey Park my own. But that was long ago, before I married a barmaid from Nicaragua, before I inherited an extended family of aliens and castaways, before we had Max, our maple-skinned, almond-eyed chameleon of a son, whose childhood I was determined to mold and preserve.

Through eucalyptus, past weeping red bottlebrush, over bark mulch, La Loma hugs the hill, pausing and ascending and pausing again—a vertical park, winding to some unseen pinnacle, rather than the naked grid of a playground. Each level of La Loma is distinct, concealed by shrubs and connected by stairs, exactly forty of them from bottom to top. Climbing them all is like scaling a labyrinthine tree fort, part Dr. Seuss and part Swiss Family Robinson. La Loma twists and strays, a dense wall of ice plants here, a secluded meadow there, a nest of hornets, a shock of wildflowers, a connect-the-dots of gopher holes, another rise and a thicket and a clearing, the park revealing itself with each turn. For as long as we have been going to La Loma, Max has been carving his own path, as all the kids do, finding freedom in the bramble. He squeezes between the narrowest gaps, scampers up the trickiest banks, and slides down the steepest chutes on rafts made of twigs and cardboard. Their name for this caper is Mission Impossible, and I can almost hear them dun-dun-dern-dern-dun-dun-ing the theme as they traverse the slopes, imbuing the topography of La Loma with drama.

Up the steps, on the highest levels, La Loma grows flat. The terraces unfurl into broad fields, like the mesas of a Road Runner cartoon. It is there, between March and July, that we play baseball—hundreds of boys and girls, hundreds of games a year. Because of the grade and the foliage, it is difficult to see from the street that any of this is happening, difficult to imagine that the fortunes of an entire Little League could be contained within the undulations of this one hill. To discover La Loma, to cross its threshold, to rove its crooks, to emerge, breathless, at its summit, is to view Los Angeles from the inside out. Downtown is just seven miles away—the basin sprawls below us, the skies above sparkle with LAX-bound jets—yet from this perch, it is quite possible to think of La Loma as its own universe, a secret park, into which nobody ventures without meaning to be there.