Stories: Magazine Stories: The Geography of Getting By 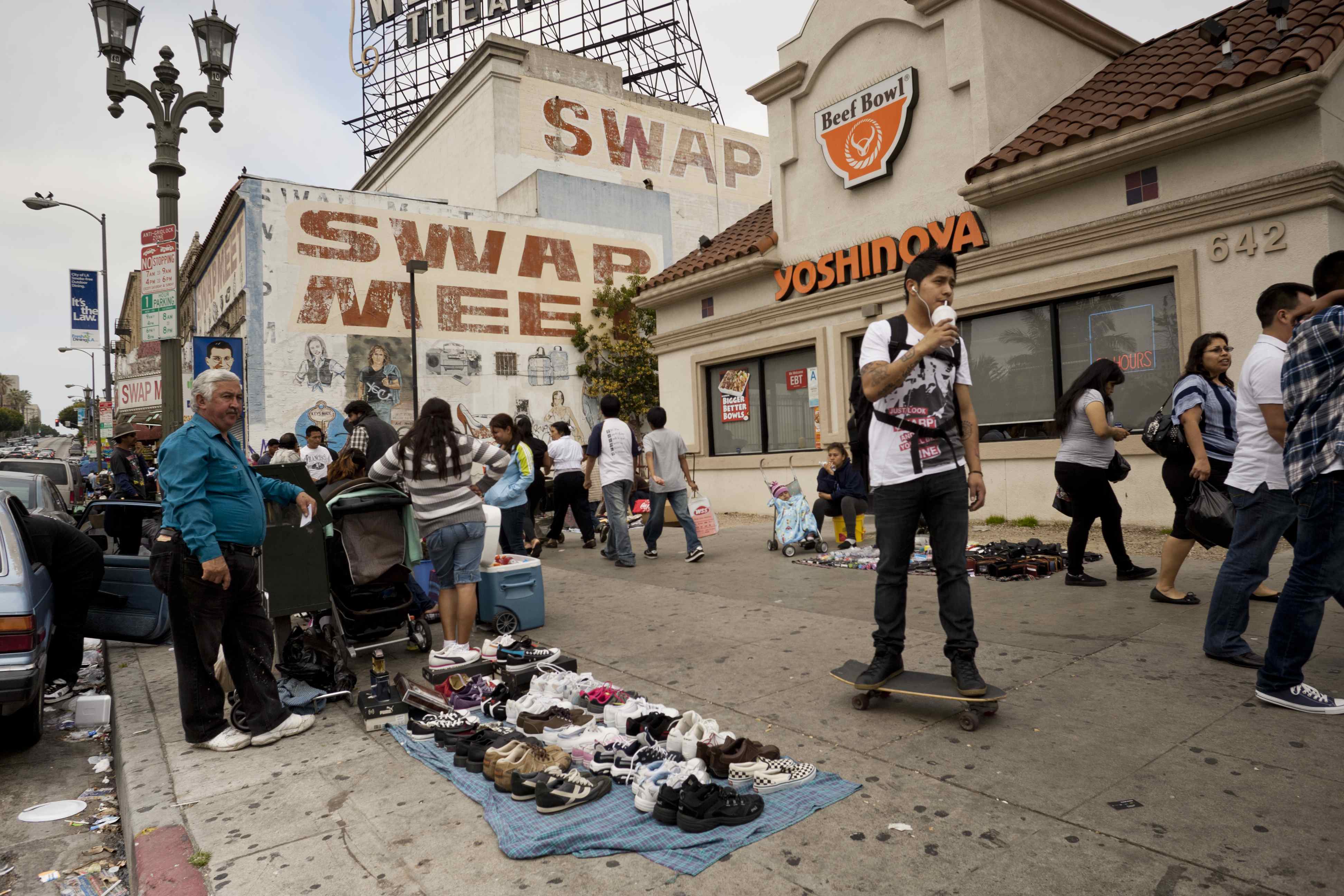 "The Geography of Getting By"

A mile west of the polished-granite and tinted-glass towers of the Los Angeles skyline, in the dense Central American hub of MacArthur Park, there is a street called Little. It is exactly that, a one-block nub, sandwiched between Wilshire on the north and Seventh on the south, bookended by stop signs, leading to nowhere. Iron bars run down the east side of the sidewalk, shielding an elementary school from intruders; on the west side, more bars, these topped by diamond-shaped barbs, guard the rear of an apartment complex. You could drive past Little Street a thousand times and never notice it, much less have reason to turn here.

Every weekend since last December the city has sealed off Little with plastic Department of Public Works sawhorses. A vinyl banner, designed with clip art of a rainbow-swaddled cornucopia, stretches across each set of barricades. “ArtGricultural Open Air Market,” the sign says, a portmanteau of artesenía and agricultura that, in any language, requires some effort. On a gleaming Sunday afternoon, not long after the market’s debut, a Honda generator was lumbering on the asphalt, powering a P.A., and a representative of the MacArthur Park Neighborhood Council was at the mic, looking to whip the crowd into a wallet-opening frenzy. The bursts of Spanish conjured a late-night TV huckster, if he were Nicaraguan and backed by a cumbia beat: “Bienvenidos al mercado número uno del área. C’mon in, don’t be alarmed. Everything’s cheap, cheap, cheap!!! Loco, loco, loco!!!”

The pitch was delivered with equal measures optimism and irony. At that moment, Little Street was empty—or more precisely, it had 16 functioning stalls, out of the 60 that organizers had budgeted for, and zero customers. The bottles of knockoff perfume that Laura Carpio had arranged like glass dolls were cooking in the winter sun, the Blue for Lady turning a murky brown. The lettuce trucked in by Candelario Guzman, the street’s lone farmer, looked as though it would need some luck to survive the three-hour haul back to rural Santa Barbara County. Instead of an open-air market, Little Street was more like a holding pen, its inhabitants culled and quarantined from the herd. The hour growing desperate, Francisco Aguirre, the sock and shoe man, turned to the occult. He opened a slim packet of incense, the kind sold at botánicas and other folk apothecaries. The label said “Llama Cliente” on one side, and on the other, “Call Clients”—a metaphysical plea for shoppers.

“The others, they say to me, ‘Dumbass, why are you there? You’re wasting your time,’” said Aguirre, who sparked a stick and set it at his feet, the aromatic curls wafting over his Dodgers cap. “And, well, it has been somewhat frustrating. But one needs patience—and faith, lots of faith. I believe this will get better. It has to.”

Four blocks to the west, not 500 yards beyond Little Street’s officially sanctioned confines, the others are gathered on Alvarado, MacArthur Park’s broad, garish thoroughfare. There, from Seventh Street across Wilshire Boulevard to Sixth Street, the sidewalks thrum with old-country, hand-to-hand commerce—an underground bazaar in plain view. Any product that can be rolled on wheels, in a shopping cart or baby stroller or suitcase or wagon or cooler, is hawked to the parade of families, from Usulután and Olancho and Sacatepéquez, that by tradition and necessity do their eating and shopping on foot. Outside the 99¢ Only Store, you can find boiled peanuts and raw shrimp and Salvadoran pupusas grilled on propane burners. On the curb by New Life Immigration Services, you can browse bootleg DVDs and imitation Lacoste shirts. At the entrance to the Red Line subway, you can have, for a dollar, anything James Acuña has scavenged: rolling pin, cell-phone charger, orange bandanna, Snoopy alarm clock. Down by McDonald’s, you can score a shoeshine or a coconut or the commodity that has made MacArthur Park a destination for decades, counterfeit identification. “Micas, micas,” the touts hiss, using the Mexican slang for a laminated card, “seguro social, licencia, you wanna ID?” In between, you must navigate a procession of beggars, evangelists, shills, pickpockets, and at least on this day, a fedora-topped hustler trying to unload a bottle of Bacardi 151, half-price.

“We are between the rock and the hard place,” says Carlos Ardon, whose nonprofit Public Immigrant Policies Institute of Los Angeles manages the Little Street market for the city. “We have vendors here who are trying to become part of the system, who are doing this in good faith. But I’m thinking—thinking, thinking—how is this going to work?”