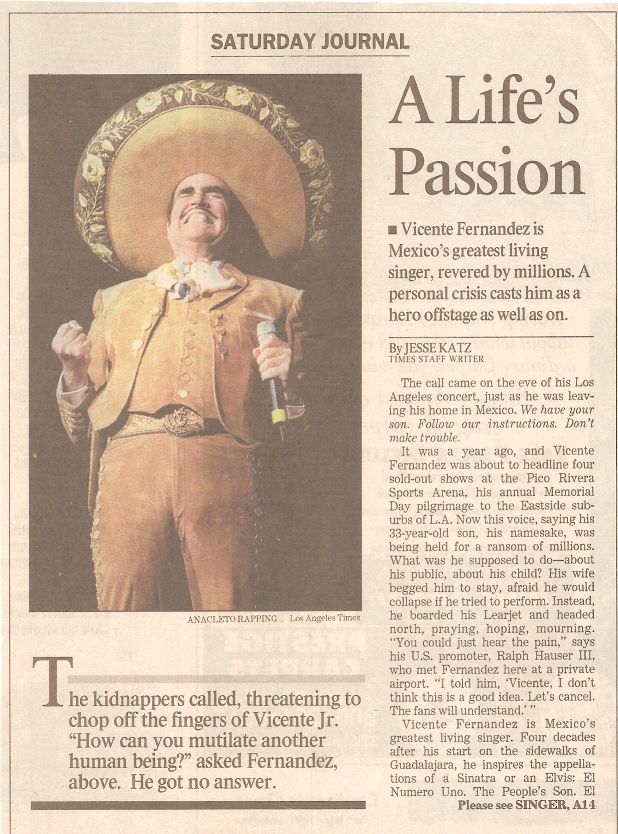 The call came on the eve of his Los Angeles concert, just as he was leaving his home in Mexico. We have your son. Follow our instructions. Don't make trouble.

It was a year ago, and Vicente Fernández was about to headline four sold-out shows at the Pico Rivera Sports Arena, his annual Memorial Day pilgrimage to the Eastside suburbs of L.A. Now this voice, saying his 33- year-old son, his namesake, was being held for a ransom of millions. What was he supposed to do—about his public, about his child? His wife begged him to stay, afraid he would collapse if he tried to perform. Instead, he boarded his Learjet and headed north, praying, hoping, mourning. "You could just hear the pain," says his U.S. promoter, Ralph Hauser III, who met Fernández here at a private airport. "I told him, 'Vicente, I don't think this is a good idea. Let's cancel. The fans will understand.' "

Vicente Fernández is Mexico's greatest living singer. Four decades after his start on the sidewalks of Guadalajara, he inspires the appellations of a Sinatra or an Elvis: El Número Uno. The People's Son. El Rey, King of the Mexican Song....