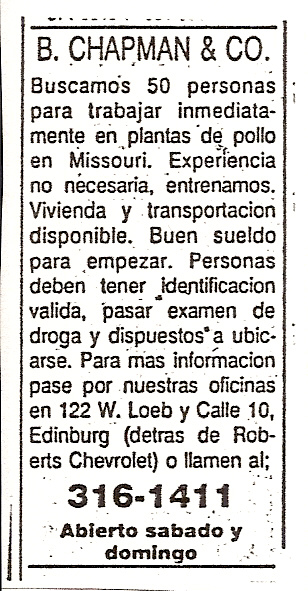 EDINBURG, Texas—On a sweltering South Texas afternoon, the kind that stifles everything but the cactus and mesquite, Greyhound bus No. 6462 pulled away from the Mexican border and set off for the American heartland. We were headed north to work, seven strangers and I, none too certain of where we would end up or what to expect once we arrived.

We'd all seen the help-wanted ad offering to send us to Missouri, to a place where the chicken factories were hiring. "No experience needed, we train," it had said in English and Spanish. "Transportation provided and housing available. Good starting wages." Those lines had been running in the local papers for more than a year, passed from one family to another like word of a cockfight in the shantytowns of the Rio Grande.

It didn't matter that few could have pointed to Missouri on a map. It didn't matter that a chicken factory, whatever went on there, couldn't possibly be very pleasant. These borderlands already had shown what they were about, the Texas side floundering under one of America's highest unemployment rates, and its southern neighbor many times the worse. Hitting the road surely offered better odds than staying put....